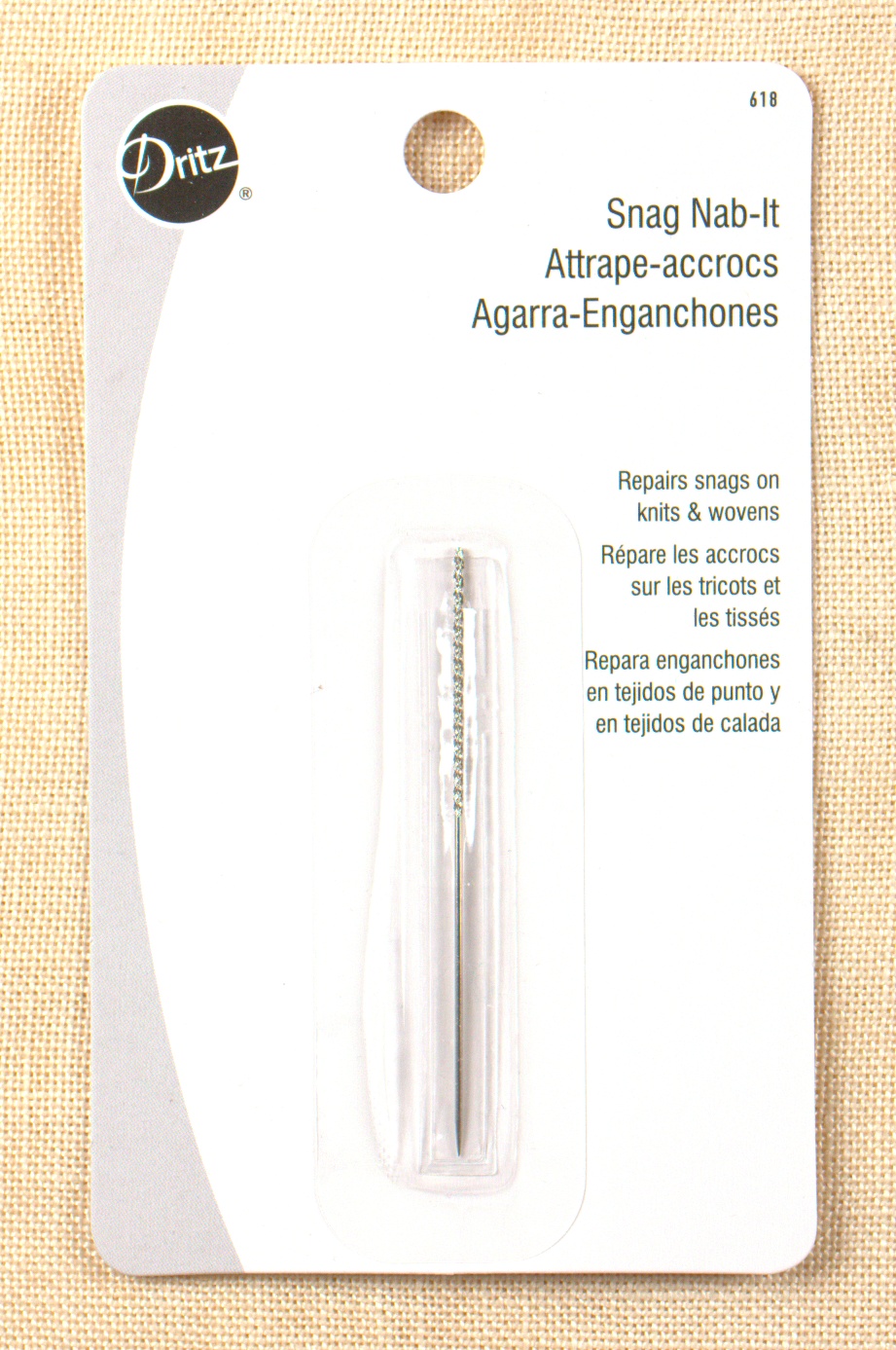 on 05/04/2021 - Why didn't I own one before????
After cross stitching for 40 years, I finally discovered the Snag Nab-It. One use is enough to make you buy another for your best cross stitching friend! Invaluable to all us who suffer trying to pull that snag back through where it came from.

on 11/18/2020 - A Neccessity!
This little tool is a stress reliever. No more little fuzzies or threads peeing through where they don't belong. Snag Nab-It is a must for cross-stitchers.

on 03/06/2020 - Snag Nab-it, how did I do without it
Saw this on Floss Tube and had to have it! Not available in The Netherlands so ordered it at 123stitch. So happy to have discovered this.

on 02/15/2020 - The Snag-Nab It
This is an indispensable tool for cross stitch. It works beautifully for evening out rough stitches.

on 02/01/2020 - Great tool
This is all over Floss Tube...had to have! So great for moving pulled threads on the front to the back...a must have tool for cross-stitch!

on 10/29/2019 - Best Item to tuck in short threads!
Have owned this item for years! I taped the plastic holder that it comes with to the side is a jar on my sewing end table! It will tuck in pulled threads on sweaters, and floss that escapes on embroidery! Wonderful tool

on 08/20/2019 - Everyone needs this if you stich
This is a great tool for embroiderers or Knitters. If you have a piece of thread sticking up on the wrong side this tool will grab it and you can easily push it to the other side. Get several as they are Easy to drop and hard to find.

on 03/16/2018 - A must-have tool for any stitcher!
Perfect tool when working with metallic threads.

on 02/21/2018 - Good for low count linens
This tool works well to pull threads to the back of your work on lower count linens. The tool is definitely too large to use on anything higher than 32 ct though. Wish there was a second, smaller size.

on 02/07/2018 - What a little tool!
Since I found this neat little tool I would not stitch without it. I do not use it a lot but when you have one of those stitches that just does not want to lay down this helps in doing just that.

on 01/01/2018 - Must Have
I was recommended this from a Youtube video, it's on of those items that you could probably live without but once you have it you'll be surprised how often you use it and how handy it can be!

on 12/30/2017 - Snag Nab-It
This is the easiest tool to use for repairing snags. I had an old one that would get caught on the fabric, so I always hesitated to use it. A saleslady showed me her Snag Nab-It that a previous customer gave her years ago. I bought extra and gave some as Christmas 'extras' with other gifts to family. It comes in a carry case and is so small that it takes up so little room to carry in your purse...that's where mine will be!

on 12/23/2017 - The BEST!
My favorite use for this tool is to fluff up Whisper thread. Of course the tool works great for fixing snags and loose threads too. I don't know how I lived without this thing for 30 years.

on 12/10/2017 - A Must Have
I order several of these each time I place an order! Snag Nab-It is great as a stitching tool,as it neatens up a stitch that doesn't quite lay right. It works well with clothing repairs, too.

on 11/22/2017 - Snag Nab-It
I had the one loose stitch that I just could not get to tighten up. I followed the directions and used this tool, and it fixed it right up!

on 11/01/2017 - Super Tool
So easy to use! This is my second in over 66 years of stitching. You just put it in your fabric where thread sticks up, put the end shaped like a needle in the nearest hole holding the snag and it will push it to the back! It never shows, so you look like the pros!

on 10/21/2017 - Great little tool!
Such an inexpensive little tool. I dont know how I didnt know about this thing before. Makes dealing with those lose threads on cross stitching so much easier

on 08/12/2017 - Snag Nab-It
Great little tool is wonderful to pull through stray threads on my cross stitch.

on 06/30/2017 - Fantastic little gizmo
This is a needleworkers MUST have. Ever notice a stitch sometimes does lay just right? This little rasp is just the perfect tool. Help pull loose ends through to the bottom, helps to adjust the way a stitch lays.

on 05/28/2017 - i love it
I tried this on my cross stitch project. I had a small stitch pop up and I was already past the point to undo it, so I decided to give Snag Nab It a try. I followed the directions and it fixed the stitch. Thanks

on 05/26/2017 - Handy tool
This is such a handy tool for my cross stitch! I also used it on my snagged wool sweater to great effect.

on 05/18/2017 - Snag Nab-It
I was already making an order and decided to throw this in the cart on a bit of an impulse. I have a few large gauge sweaters I'm always using very small crochet hooks to fix and thought this may be easier. Boy, is it! Not only did it "mend" you can't see the snag on the front and that's what matters, right? all of the sweaters that were too tightly woven for my crochet hooks, but it was also able to take care of the snags on my husband's tightly knit/woven microfiber work shirts. I'm sold. My husband was so amazed that I generously gave it to him maybe he'll repair some of his own stuff now? and plan to order another to keep in my sewing room and one for my Mom the next time I put together a cart. To use it's basically like making a single stitch with a needle one end is sharp and you poke that through the front of your fabric in the middle of the snag. Then you pull the Snag Nab-It completely through and out the back. The textured top will catch the threads in the snag and pull them through to the back side of the fabric with it, effectively hiding and "repairing" the snag.

on 04/22/2017 - Little gem
This little tool works like a charm getting thread from the the front to the back. I was graphing my pattern using thread on the material and I was using this to pick out the stitches then I had a stray thread sticking up I put this little gem to work and the thread went to the back easily. This is very handy when you have to find the end of the thread to take stitches out. This is a simple tool you will find many uses for and you will wonder why you didn't purchase it long ago.

on 04/16/2017 - Unsure How To Use Snag Nab-It
The rating I have given this product is only because I was unable to get it to work as described. I followed the directions on the packaging of the Snag Nab-It, but I was unsuccessful in getting it to work. Maybe with some practice on my part, I can accomplish it, but I think I need someone to demonstrate how to use it.

on 03/16/2017 - Don't know how I lived without it
I was already making an order and went ahead and added it to my cart. I used it the same day it arrived, and now I'm not sure how I lived with out it.

on 03/06/2017 - How did I ever get along without it????
Whoever invented this little gadget was an absolute genius. I've used it several times since I got it, and it works just as described. I'm going to order another one as back up.

on 12/29/2016 - Best Little Tool Ever!
There is nothing that can do the job this little gem does! I keep one in my desk at work and one at home. Gave all the girls in my office one for Christmas and they LOVE it! Many never knew it existed.

on 03/08/2016 - Wonder tool
I can't believe I ever stitched without it. Grabs stray threads fixes little problems in a snap.

on 02/29/2016 - Snag Nab-it
This is so amazing. I can't believe how many times I need to use it. It pulls any bits of excess thread or slight mis-color in a minute. Thank you

on 04/07/2015 - Can't believe I ever lived without it!
I've been doing needle work all my life and was amazed how useful the snag nab-it is. I use it routinely to clear thread ends in cross stitch or tighten the tension on a stitch. Snags and knots are no longer a problem.

on 01/29/2015 - Awesome Tool Everyone Needs!
Snag Nab It was really easy to use! Also made my sweaters look brand new again! Now all my snagged sweaters are looking great snag free again!