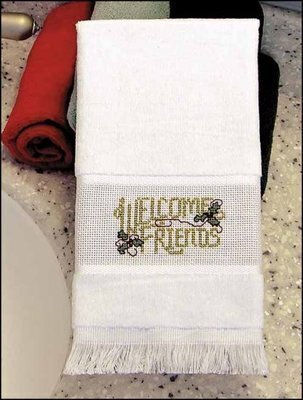 on 12/14/2016 - Hand Towel
I was disappointed in these towels, They are so thin compared to some of the same towels I purchased earlier in the year. What happen.

on 05/03/2016 - Easy to stitch
Even though it's a 14ct the holes seemed large so it was really easy to stitch this piece. I made two towels for Christmas for a friend and they came out beautiful - even after washing. I love the velour feel.

on 03/25/2016 - Plush
The towels are nice and plush and the stitching area looks easy to see. I haven't begun this project yet, but I really like the towels. They're high quality.

on 03/09/2015 - Hand towel
I was very pleased with the texture of the towel. I have not started on the project as of yet, but I am sure it will be all I expected. Very prompt service also.

on 12/09/2014 - Velour Guest Towels
The velour guest towels I ordered recently were exactly what I waslooking for. I stitched a small Christmas design on them for a gift for one of my friends. Joyce Simmons

on 11/02/2014 - Guest Towels
They were good quality, soft and will be easy to do my counted cross stitch on. I would order them again and would recommend them to my friends.