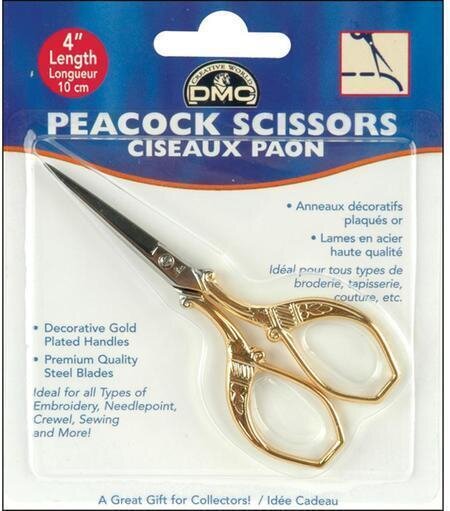 on 05/10/2021
Finger holes are a bit small, and I ran mine through the sharpener as they weren't cutting thread well

on 12/30/2016 - Lovely little scissors - for small hands
I have always wanted a pretty and sharp pair of scissors. These are both pretty and very sharp. The finger holes are a little small. If you have large hands I would order a different set.

on 03/23/2016 - peacock embroidery scissors 4"
Excellent Product. As long as you use them for cutting thread and material,they outlast any scissors I have ever bought.

on 09/16/2015 - Good scissors to travel with
These are nice and sharp, small for travel projects but the holes are small for my fingers. They get the job done, but I prefer ones that aren't quite so tiny.

on 03/02/2015
Beautiful scissors. Light weight but really is sharp. Looks like I will have it for years. Timeless

on 02/09/2014 - Cute and Functional
These scissors are just lovely and a nice, small size for close work. They're a quality item and I can't believe the low price!