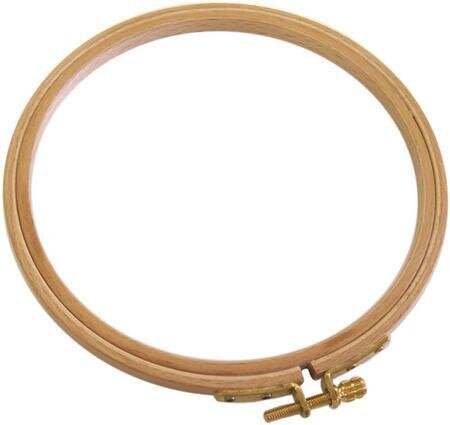 on 04/05/2021 - Not as advertised’
They clearly stated this was made in Germany.... came with a tag saying made in China!!!! Looked back through other reviews and from over 4 years ago there was the same complaint from several other customers but they never changed the deion on their website... could buy the same for less at a Walmart or Joann’s...very dissatisfied!

on 04/21/2017 - Really nice
I bought this hoop to use as a frame for a finished project. It is such a nice looking hoop. It's feels thick and sturdy and is smooth and just looks very nice. This German hoop looks so nice compared to regular hoops that I will purchase this kind whenever I can for framing any projects from now on.

on 10/12/2016 - Buy this
This is the best embroidery hoop I have ever owned or used. Once you use this hoop you will NEVER want to use another. I have been stitching for 40 years and I wish I would have found this sooner.

on 08/24/2016 - German hoop
I love this hoop it is light in your hands feels good to the touch .I like it cause it has less hoop marks on my fabric then the plastic one's that leave deep marks in my fabric.the ring marks are light and easy to remove when done stitching.well made not like the one's you find in the local stores for a few dollars.well worth the price .love them happy stitching

on 12/18/2015 - Somewhat Displeased
I was disappointed in the color as it appears darker on page and I believed and it states below that it is made in Germany but it is in fact made in China! at least that was what the sticker on mine indicated and the glue from the sticker and the sticker itself was difficult to remove. I did like the workmanship of the hoop.

on 03/16/2015 - Disappointed
I was disappointed in the quality of this hoop. I thought being from Germany it would be good, but as I started to use it, metal filings kept showing up on my linen. They were coming from the brass ? screws on the hoop. I tried to clean off all the screws, but was disappointed that I had to do that. Won't buy another one.