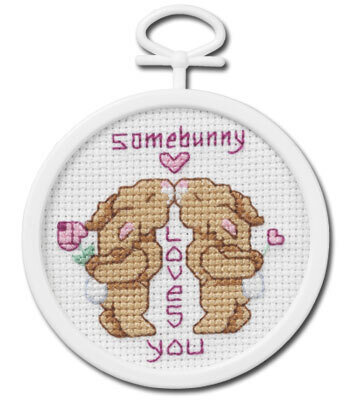 on 02/21/2016 - Just adorable
I have been cross stitching for years and thought this was a little difficult for a beginners kit. There is a lot of half cross stitches which I don't like and a lot of back stitching. By the time a beginner is finished with this, they should know what they are doing, I completed it and it is just adorable and I put a magnet on back and it is now on my fridge. I actually got this for my hubby!!

on 05/04/2015 - Cute, but impossible to finish
I really wanted to like this pattern, I thought it was so cute. But when I first opened up the package, 2 of the 4 or 5 colors were wrong. I ended up with 2 different kinds of blues and no magenta. That aside I thought, hey I'll still give it a try and just use the dark blue in place of magenta. Half way through, I ran out of brown and couldn't finish the bunnies. Granted, I'm fairly new so I made a few mistakes which probably wasted yarn, but as a beginner's cross stitch kit, I thought they'd pack in a bit more yarn to accommodate. I still think the idea of it is cute, I just can't finish it now with the materials I have.