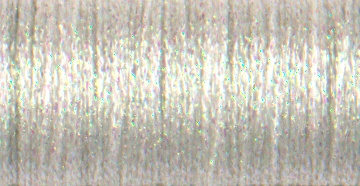 on 04/16/2022 - Kreinik Braid
Kreinik Pearl #4 Braid is the perfect color to give that extra shimmer to winter projects. It is the perfect size on 32 count linens. Easier to work with than some other metallics. Just don’t use super long lengths of this thread.

on 12/03/2020
This is my second purchase of this thread. With the first purchase, I had no problems and was happy with it. However with this second purchase of two spools I'm disappointed. The thread was not put on the spools uniformly. On one spool I can see through to the actual spool. I'm not sure the spool contains the amount of thread it says it does.

on 02/02/2020 - easier to use than some "metallics"
I'm working a pattern on 28ct monaco, and I find 1 strand of this in tent-stitch balances well with a single strand of DMC in full cross. This pearl shade adds depth and dimension to a scene with puffy clouds, perfect!

on 08/27/2019 - Sparkle
Lots of people dont like to work with this but I find short lengths and one strand work best.

on 05/17/2019 - Wonderful Metallic Thread but Very Expensive
I ordered this to see what the difference was between a less expensive metallic thread & this one. This one was amazing to work with. I loved it! I will have to say, though, that this thread is much more expensive than pretty much all the other metallic brand threads out there. There is very little yardage on the spool. I had enough to do one project with a little left over, so you have to keep that in mind when ordering. I gave it 4 stars instead of 5 because of the high cost of using this thread.

on 02/02/2019 - Wonderful
123Stitch is a 10! Great selection, great service and great prices. I've been using this site for several years and love it! My only problem is I always want to purchase more than I have time for

on 10/03/2018
My local needleworks store quit carrying Kreinik thread. I use a lot of it for charts with snow. Happy to see 123 carrys it. I ordered 4 and have all ready used 2.

on 08/10/2018 - Adorable!
These sleds are used to make Christmas ornaments using perforated paper and Foxwood Crossing charts. The sleds are solidly made of wood and metal. They make adorable ornaments!

on 03/31/2018 - DMC Krenik
My first time to use this but it worked out ok... biggest problem is threading the needle. It has added glitz to my first HEAD project!

on 04/10/2017 - Pretty braid
This braid is true to the color of the blending filament and is very easy to work with.

on 07/01/2015 - Nice
I'm actually enjoying stitching with this and love the sparkle it gives my project. So far not one knot, huge plus! I ordered about 7 spools of it since I know I have other charts that will require it as well.

on 10/22/2014 - Nicely done for thick sparkle thread
The thread is well put together and works great for like snowflakes or anything that you need to have bright and sparkles. It is thicker thread and will not fit through my beading needles. Will buy again and again!

on 06/14/2014 - 4 Pearl Thread
I could not find this thread anywhere. It was easy to find on the website and was a great price. It was delivered faster than I expected. I have ordered other items from 123stitch and have been very pleased with it all.

on 11/04/2013 - Pearl4 Braid
I am using this braid now for a HAED. It's titled GOd's Hands. This braid makes the picture sparkle. I can'r wait to get it done it will be beautiful..Joann

on 10/04/2013 - kreinik specialty thread
The price was great, glad I found your website, can not find Kreinik here where I live. It arrived faster than I thought.