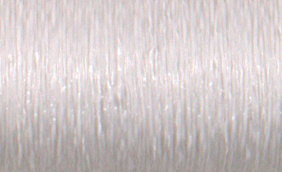 on 07/24/2015 - Worst Metallic Filament!
I have used many metallic threads, of different brands and different types. Many of the products from Kreinik are great, including most of their blending filaments. However, there is something they did differently when making this white filament that is terrible. The filament partially splits into a metallic strand and cotton strand, but the metallic strand loops and twists independent of the cotton one. You end up with a twisted, knotted, loopy mess that is not worth the frustration to sew with.If you want to add some sparkle to a white thread, skip this one and add something else, like a Pearl 032 instead.