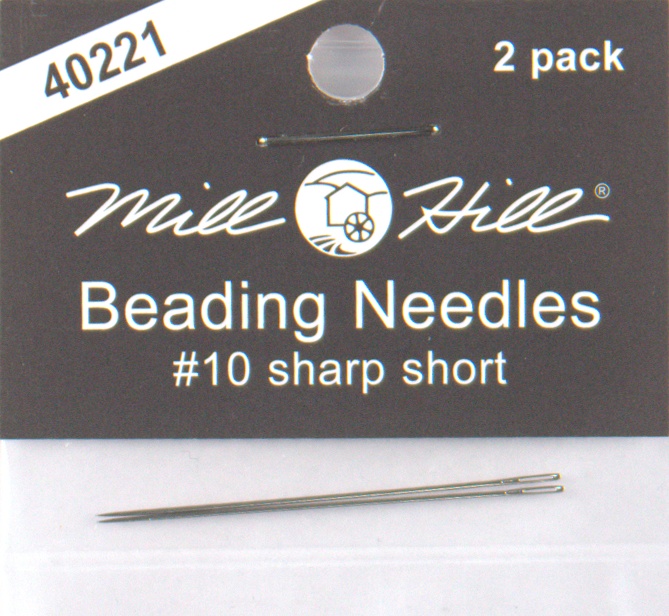 on 05/09/2022 - Mill Hill Appliqué Beading Needles
These needles work great for adding beads to the Mirabillia patterns. They work for the regular beads as well as the petite beads. Love the needles.

on 02/21/2022 - Beading needles
These needles are wonderful. Beading with the standard long needles is very awkward and difficult. These short needles make beading work so much easier and more pleasant. One does need a tiny wire threader to make threading a snap.

on 12/11/2018 - impossible to thread
The eye of this needle is so tiny you couldn't get a single strand of thread through it, and the instructions called for TWO strands! When we finally managed, after an hour of struggle, to thread the eye of the needle, the eye broke! I ended up buying collapsible beading needles at a craft store locally.

on 10/11/2018 - Perfect For Cross Stitch Beading
These are very fine, yet sturdy and fit through the smallest bead. The shorter length makes for better control and much less thread waste. Would prefer a blunter needle point however.

on 05/01/2018 - Love them
I like to use the petite seed beads and these are perfect for them. I wish I could find a needle threader to match the petite eye of these needles so I don't break the needles.

on 12/31/2017 - sharp and thin
These are good for stitching even the tiniest beads on fabric. The problem is I prefer a dull beading needle when working on cross stitch, as this sharp one has a tendency to get jammed up my fingernails...ouch!

on 01/24/2017 - Beading made easy
These needles are the best ever! They actually work. So much better than the others I have tried. The best thing is that they are small and fit the beads. So easy to use. Thanks, 123!

on 12/16/2016 - Beading Needles
I was hesitant to try these, I have had such problems with needles. These are AMAZING! I highly recommend. They work so well with the seed beads and don't bend up!

on 12/14/2016 - Best beading needles EVER!
I am so grateful to have found these needles. They are the length of a tapestry needle but slimmer and perfectly fit the petite beads. They have saved my sanity with a very beaded project. I love them. Thank you, 123 and Mill Hill!

on 11/12/2016 - Best beading needle ever!
I have used another beading needle before I discovered this Mill Hill beading needle. This needle made my beading project a joy to do. It is so easy to thread so that no needle threaders are needed. I will always use this brand.

on 10/28/2016 - Excellent
I love the smaller size of these needles and I don't struggle with threading the needle.

on 10/10/2016 - needles
The beading needles are very good. They are easy to thread with a needle threader. I am very satisfied. Would recommend them.

on 09/11/2015 - The BEST beading needles!
These needles are fabulous! They fit through petite seed beads beautifully. The eye of the needle is large enough to accommodate two strands of floss without shredding or breaking it. After trying many other brands of needles, these are superior in every way and the only beading needles I'll use now.

on 06/16/2015 - Easty to work with
I enjoyed working with these needles. I only found one bead so far that the eye of the needle would not pass through. Relatively easy to thread too, considering the size of the eye.

on 10/06/2013 - Good Beading Needle
This shorter beading needle is much better to use in our cross stitched patterns than the longer ones we had been using. Highly recommend them.