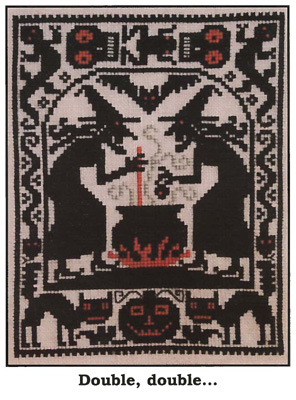 on 09/22/2017 - Love it
Large enough to stitch without copying. No errors found. Darling Halloween design.

on 01/09/2017 - Halloween Spells
Such an adorable pattern I look forward to stitching it up! I can't say enough good things about 123Stitch they are so efficient and their service is tops!!

on 10/03/2015 - Super design!
Love this pattern! They really look like old cronies and like the title from Sakespeare's Macbeth. Their designs are such fun to stitch! I really like this.

on 11/19/2013 - Wild
I love how this picture makes me feel like I'm looking through a window at the witches brewing up something. It's simple- it's right to the point and uncomplicated.

on 10/18/2013 - Double, double, toil and trouble
The pattern was much smaller than I would have liked. It would have been more useful and easier for me to work with had the card been larger. As it is, it's almost too small to see. I need a magnifying glass and that's a bother. The size of the pattern was not included, and I'm not talking stitch count. Christine