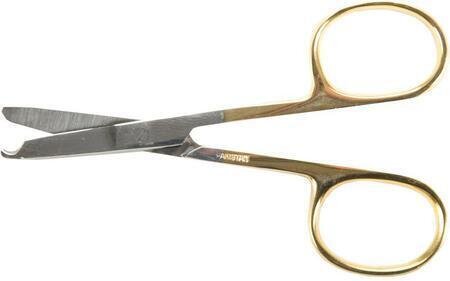 on 08/11/2022 - Snip a stitch stitch
Works great. You still need to be careful. I snip from the back and use twissors to pick up the loose ends.

on 08/01/2022 - Not useful for cross stitch
These little scissors work fine as a pair of scissors, but I got them specifically to use to lift and cut threads when the dreaded "frog" appears. Unfortunately, the point on the scooped side is too thick and cannot slip under threads on my cross stitch. I wouldn't recommend them for cross stitchers.

on 03/31/2021 - Gifts for friends
I bought this type of scissors decades ago and use it constantly when I need to snip something close to the fabric or floss. I bought one for myself as a back-up, and one for each of my two friends. I don't see these for sale very often. I took advantage of the offer while available.

on 09/14/2020 - NOT RECOMMENDING Snip A Stitch Scissor
NOT RECOMMENDING. Did not expect the blades to be so thick. Not useable for removing cross stitch threads. So thick doesn't fit under the stitches that need removing. I work on linen with one thread of floss. Don't know if they would work on Aida cloth over two threads? But definitely not for linen and single threads. Suspect the manufacturing of these speciality scissors has changed over the years. Very unfortunate and I would to recommend. I have also purchased Gingher 3 1/2 inch embroidery scissors to replace a pair I've had for years that got damaged points. Again...very disappointed in these new scissors...thick and clumsy to work with....nothing like the older Gingher. Am going to try to find a person who can resharpen the blades on my old ones.

on 09/16/2019 - Great!
I have carried a pair of these with just about every project I am or will be working in. I have read some negatives but I have not had any problem.

on 06/26/2018 - They don't even cut...
The purpose of these scissors is to be able to lift the thread with the hooked blade to cut. These scissors are so dull, not only can they not cut thread, there is no hook to get under thread to begin with. I've taken them to a scissor sharpener in hopes that he can at least get them sharp enough to cut. A complete and total waste of money. Don't purchase.

on 04/28/2017 - Snip-snip-snip
Have used these scissors for many years.....ideally I wouldn't need them very often but sure am glad to have them when I do.

on 10/27/2016 - Snip A Stitch Scissors A perfect tool!
I bought some of these several years ago for cross stitch, but I also use them for my embroidery kits as well, sometimes a mistake is made and this nifty tool allows me to remove it without hurting the material!

on 05/13/2015 - Child safety scissors?
I've purchased several of these over the years. They have gotten consistently duller and rounder and can no longer slide under the thread to clip it safely. What happened to the sharp point? They are very much like child safety scissors and are fairly useless for the purpose for which they were intended. Very disappointed.

on 10/27/2014 - Snip-a-Stitch scissors don't work
The small hook on the scissors is too big. You can't get the hook under a loop to cut it. I DO NOT recommend this scissors because it doesn't do the job it was designed to do.

on 10/11/2014 - Snip-A-Stitch Scissor will not work for removing x-stitches
I purchased these scissors to replace a very old pair that had worn out. The hook on the originals was fine enough to slip under a stitch cross stitches and snip out - making the removal of mistakes so easy. However, these Snip-A-Stitch Scissor blades are far too thick and the hook is equally thick making it impossible to slip it under even normal work on 32 ct. I have returned the scissors.

on 02/05/2014 - Nice snip scissors
These little scissors are a must have. Over the years I have owned several pairs, but I misplaced them. I ordered 2 new pairs recently to find they are no longer entirely stainless steel, but they are still very good. The only complaint I have is that they need to be "broken in". Silicone spray helps.

on 01/22/2014 - Disappointed
These were not as I expected them to be. I once had a similar pair which I loved, but the "hook" was much more pointed. These look like something I'd give a kindergartner to cut paper. The blades are sufficiently sharp, but I was looking to a "pointier" point, and these are just not useful for my purpose. Thanks anyway. Must say, though, your customer service is top-notch!

on 01/13/2014 - Not quite what it should be
The one I received had the 'hook' way too back on the scissor blade to be able to use them to actually pick up a stitch. They are good scissors but this makes them useless for what I was going to use them for.