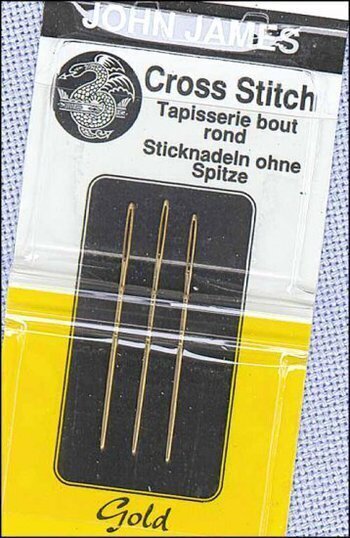 on 10/29/2019 - Disappointed in John James needles
I've used these needles before and have been pleased. However, the ones I bought recently seemed to have "burrs" inside the eye. Additionally, the eye was so small, I could barely get my flat threader through it. Once threaded, I had to be very careful about moving the thread through the needle, or it would cause it to fray. Won't spend the extra money for these again.

on 09/09/2019 - Better than competitors
Due to the size of a 28 tapestry needle, competitor needles tend to bend and break frequently. I do not have this issue with John James brand gold needles.

on 04/23/2019 - Nice Needles
Nice and sturdy, these needles make stitching a breeze. While the gold plating ensures that smooth glide, it also adds a little bulk, making them feel more like 26's. But all in all, very nice needles and some of my faves.

on 02/26/2019 - Smooth as Silk
I've been stitching Jamie Larson's Tribal marine animals with 2 strands of DMC floss on 22 count Aida and having a terrible time with needles getting stuck, or requiring a lot of effort to pull through the holes. I've tried several brands of size 28 needles, including DMC, Piecemakers, Mary Arden petites, John James Platinum and John James petites. The DMC new style have the smallest eyes, but these gold plated JJ needles are the only ones that will slide through the cloth with no or minimal effort. They're also pretty sturdy, although I'm admittedly not rough on needles. I've been known to bend a few, but breakage is rare for me. These seem as strong as the others I've tried. I like them so well I'm ordering a set of the gold petites. I think the Platinum coated JJ needles might be even smoother, but they're not a true 28, they're more like a 25-26, much too large to go easily through 22 count Aida. My only complaint is with the length. Although they're short compared to a standard 24 or 26, they're a little longer than size 28 DMC or Piecemakers. So I'm going to order the JJ 28 Gold Petites, which I hope will be just right.

on 07/28/2017 - Great needles
John James is my favorite brand of needle...the eyes hold up for me better than any brand....with other brands the eyes break too quickly...these needles hold up for lots of stitching...

on 09/18/2016 - XS Needles - Gold, the BEST
fabulous price for one of the best products available. also appreciate the fast service from 1-2-3 Stitch.

on 09/10/2016 - My Favorite Needles
I have tried many different brands and types of needles, but these are my favorite. I tend to tarnish most needles fairly quickly, but not these ones. If I am stitching a big piece I can usually get through the entire thing before having to switch out my needle. The gold plating doesn't tarnish nearly as quickly as most other needles I've tried. Now these are the only ones that I buy.

on 03/22/2015 - Best needles
This is the finest quality needle. It is smooth and slide through fabric like dreams

on 05/14/2014 - The BEST needles - bar none!
I love John James needles and the gold plated are definitely my favorite. I can feel the quality of John James needles immediately. They feel stronger and slide easily through high count fabrics such as 40 count or above.

on 04/07/2014 - Best needles available
I have tried just about every brand and size tapestry needle that is available and I continually find myself always favoring the John James gold brand. Doesn't get any better than these!