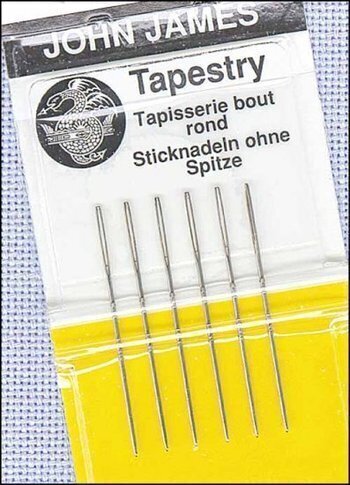 on 12/11/2019 - Excellent
These are my favorite needles, and I won't ever use anything else. They are the perfect length, easy to thread and they do not bend or break. I have tried several other brands and have found that they are either too short, flimsy, or fray the floss when threading the needle. I use the size 28 needle for 18 count cross stitch.

on 08/22/2017 - I love this company for cross stitch supplies!
I was searching for this particular needle and of course I found it here! Thank you 123stitch.com for offering just what I am looking for.

on 07/28/2017 - Great needles
John James is my favorite brand of needle...the eyes hold up for me better than any brand....with other brands the eyes break too quickly...these needles hold up for lots of stitching...

on 12/31/2016
I have no complaints about these needles. But then I see no difference in needles to begin with. ,maybe it is because I'might sort of a newbie stitcher.Given time ever I might be able to form a better opinion.

on 03/07/2015 - Size 28 John James Tapestry
I do a ton of stitching - at least 5 hours every day. These are, by far, my favorite tapestry needles - the fine size, the consistency of the product. I have not deviated from these in years.

on 01/02/2015 - Not happy
I am not happy with these. The eyes almost come to a point at the top and keep trapping my thread. The ones I got are not squared off at the top like the picture. Am disappointed as I really like John James needles and rarely use anything else. I bought ten packages. will edit this if I find some of the rest are better.

on 12/03/2014 - Great needles
These are great needles for cross stitching. They taper enough at the end to be able to get them into those tight places on the fourth time thru the hole on 20 and 22 count fabric.

on 09/15/2014 - John James needles
I ordered three packs of needles to see which I preferred and I like the John James size 28 the best for cross stitch because they are longer than the Mary Arden and Piecemakers of the same size. DMC shortened their needles so I was looking for an alternative. Now they are my favorite.

on 04/30/2014 - very good
john james are my favorites needles for cross stitch,im happy with the number 28.no use other.

on 03/27/2014 - Very Nice
Very nice needles. I like using them on 28 count fabric in the confetti areas of a cross stitch pattern.

on 10/25/2013 - 28's are great
28's are great to stitch with and the best to go back and do your backstitching.....fit beautifully between those tight stitches. Be careful not to grip them too tightly they are thin and will bend to shape of your thumb