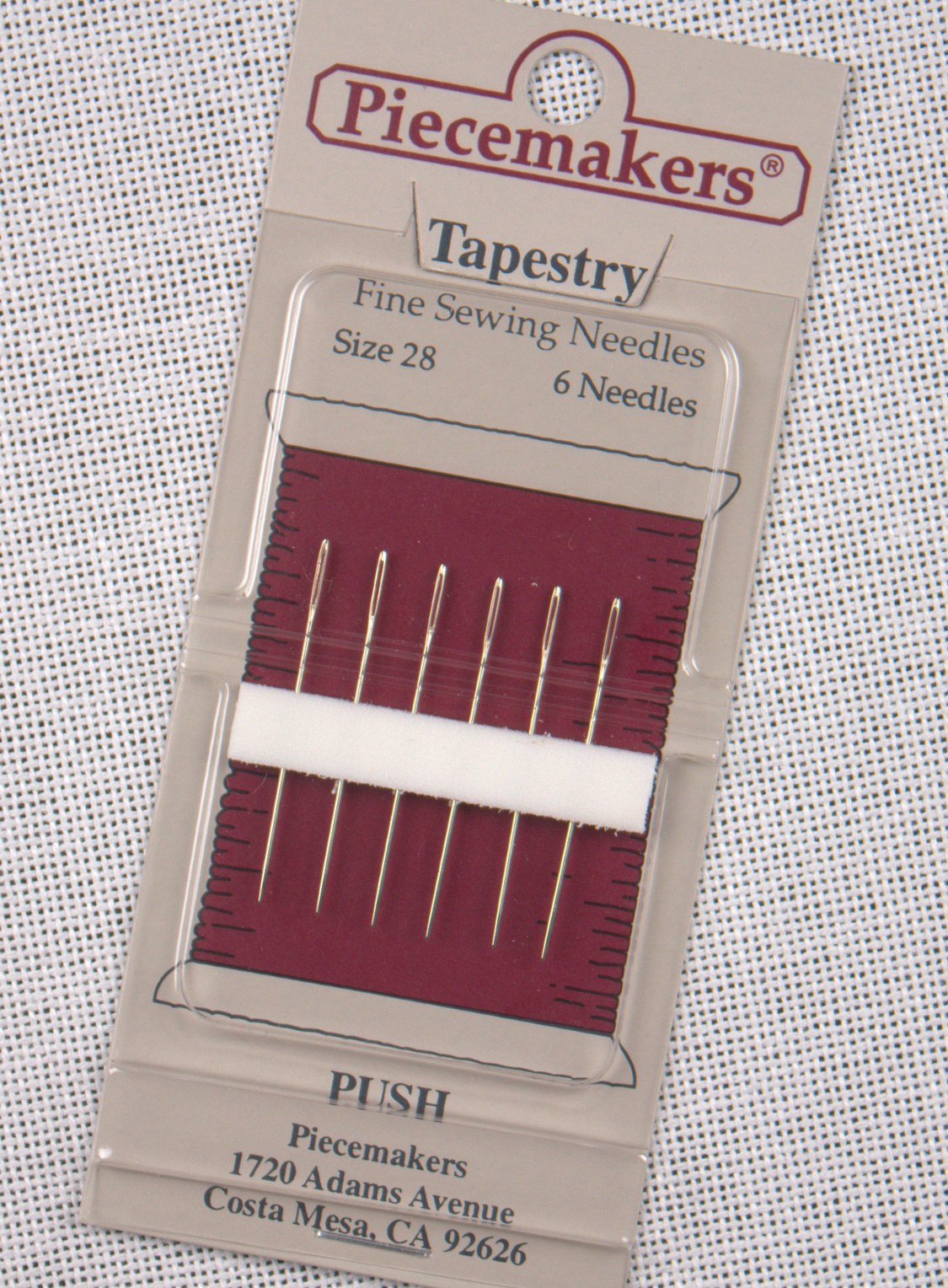 on 09/05/2021 - My Favorite Needles
After experimenting with different needles, this is my go to needle for cross stitch.

on 05/12/2021 - The best needles as far as I’m concerned.
Threading is simple cause the thread glides in every time. I never end up with breaking or splitting threads because of the smoothness of the eye of the needle. Great product I don’t use any other needles and I Stitch every day. Mickey

on 03/12/2021 - Love these needles!
A Smooth eye and nice guide through fabric make these my favorite needles by far!

on 02/27/2021 - Peacemaker 28 needles
Trying out new needles. These are great. Not to long. Not to short. Smooth and comfortable to use. Love the size of the eye.

on 07/29/2020 - Beading
Needed to find needles that can be used for beading where I can thread the eye and have the bead fit past the eye. These seem to work pretty good

on 02/25/2020 - Piecemakers Tapestry Needles Size 28
First time I use size 28 needles, they are great! Piecemakers is my favourite brand of needles. Highly recommended because they are also affordable, great quality, all sizes!

on 10/04/2019 - Best needles
These are by far my favorite needles for cross stitch. I generally use 36 count linnen and find these needles glide smoothly and don't bend like some.

on 08/08/2019 - old favorites for me.
I'm starting a mini HEAD soon and saw a suggestion to have as many needles prepped as possible. ordered seven packages.

on 04/01/2019 - Piecemakers Needles
These needles are my forever favorites. Threading is smooth they never loose their finish and the eyes never break. I have been using them for about 20 years. Good quality. 123 Stitch is my favorite go to for any of my stitching supplies and a real person answers the phone and will go out of their way to answer any question you may have. Above and beyond. Love em! Mickey Horcher

on 03/08/2019 - Piecemakers tapestry needles are great!
For decades I used DMC tapestry needles, almost always size 28. I'd buy many packages at a time and replenish my stash when I started running low, so it wasn't until a few months ago that I was shocked to discover DMC had shrunk the size of the eye on their needles to literally half of what it's always been, making them basically useless. I badly needed something else! I'd never heard of the Piecemakers brand, but the reviews led me to order several packages size 28, and I'm SO GLAD that I did. Super smooth, impressively sturdy, sensibly long eye, and honestly a pleasure to work with, they put DMC to shame. I'll keep my fingers crossed that Piecemakers doesn't change anything because I really like these needles very much just as they are.

on 02/18/2019 - Top Choice for Easy Threading
I've tried a lot of needles lately thanks for your low prices, 123, including all the John James varieties, Bohin, DMC and Mary Arden. Piecemakers are by FAR the easiest to thread using the "pinch the thread between your thumb and forefinger and slide the eye onto it" method. The needle eyes are the same length as Mary Arden's, but slightly narrower, so they shouldn't be any easier to thread this way, but they are for me, especially when using 2 strands. I love how petite the Mary Arden are, and thought I might like them best, but Piecemakers are so easy to thread, they're winning me over. They're also a little bit shorter than most standard needles, so that helps.

on 11/30/2018 - Durable and reliable.
My first time cross stitching on 32 count belfast linen,I used these needles 2. They didn't break, bend or ruin my linen. I tugged a few times, squished the eye, and no breaks-no fuss. They are strong and a good length. I absolutely love these needles and will order more.

on 08/30/2018 - The eye is great
If you hate the new design of the eye of the needle that DMC made, THIS is an excellent replacement.

on 07/05/2018 - size 28 is perfect
'love these needles, the perfect length and thickness. The needle glides through the fabric. The price is reasonable and finally discovered 28 is the best size for my fine cross stitch.

on 04/11/2018 - Piecemaker tapestry needles
I have been a counted-thread cross stitcher for nearly 40 years. I "discovered" Piecemaker needles over a decade ago and never looked back. They are smoother than John James needles, with a consistent smoothness and eyes that never break. I consider them the "Cadillac" of tapestry needles and won't use any others.

on 03/22/2018 - Wonderful Needles
I decided to try these 28s in my search for the perfect needle and so far I really like them. Ive been using one needle for about a month and so far no bending, breaking or shredding fibers. They are a bit longer than the John James Petites but not as long as the regular Bohin needles, if that helps anyone. Its a slim needle but feels firm and easy to work with. So far, this is my favorite needle for cross stitch.

on 08/05/2017 - fabulous needles
I bought these based on the reviews from other stitchers. I am so glad that I did! The don't bend around the eye when you pull them through. The eye is relatively wide. So far, so good!

on 06/29/2017 - Needles
After DMC changed the eye of their needle, I was looking for a needle with a long eye that was reasonably priced. This fills the bill.

on 03/28/2017 - What a difference!
I bought some Piecemakers on the recommendation from one of my stitchy-kin in a fb group and still can't get over the difference having a quality needle makes! I'd never have guessed it or believed, so I'm glad I took a chance and tried! I may never buy another brand, and am coming back to pick up a few more sizes!

on 03/21/2017 - Excellent product!!!
Definitely better than Bohin by a mile!!! Was expecting it to bend right away and a week later I'm still waiting. It hasn't bent at all and I'm rough on my needles. Will never buy any brand but Piecemakers from now on!!

on 02/19/2017 - Love these needles!
These are my all time absolute favorite needles and I think I have tried almost every brand name needle out there. Also the 28s are my favorite size. These hold up well and glide through the fabric smoothly. When I ordered them this time, I ordered 15 packages if that gives you any idea how I feel about them. I do not intend to use any other brand of needles if I don't have to do so.

on 08/31/2016 - Lovely smooth needles
These are such nice smooth needles! I need the size 28 for my 18 ct & smaller fabrics and these are smooth and easy to thread for me.

on 12/24/2015 - Piecemakers Tapestry Needles Size 28
These needles are easier to thread the the DMC needles I've used in the past. They also seem to be holding up longer. I'm doing a huge nativity cross-stitch picture that has 89 different colors. I think these needles are worth the difference in price than other ones I've used.

on 08/14/2015 - Best needles for hight count fabric.
I use piecemakers for many years, love them. Best choice for stitching HAED designs.

on 06/16/2015 - Needles
Was excited to try these needles, was disappointed, the needle eye must of been very rough as after about 10 stitches the thread tore and frayed.

on 05/31/2015 - Love them!
I'd heard about Piecemakers and wanted to try them. The size 28 ones I get in the store bend and break too often. So far I love these and use them with whatever fabric count I'm stitching on. I would recommend others to at least try these. I bought 2 packs and will buy more in the near future because I have multiple WIPs I switch around.

on 04/13/2015 - Piecemakers Needles
I've heard about these so wanted to try them and bought 2 packs. I really like that they are a tiny bit longer than the regular ones I picked up. And so far they haven't bent on me, which has been an issue with the other ones that also break. I'm stitching on 25ct, 20ct and 18ct. Love the smooth way they go through the fabric. If I don't end with problems I'll certainly be buying more.

on 08/09/2014 - The best needles
I never use anything but Piecemakers needles for my cross stitch. They are the sturdiest and most well-made ones around. I have tried all other brands DMC, Anchor, and various gold-plated ones but these outshine them all. The eyes never break and the needle itself is solid. I love the way they feel in my hands.

on 11/23/2013 - Awesome needles
I've been stitching for 30 years. I discovered Piecemakers a couple of years ago and now I wouldn't use any other kind of needle!!!!!

on 10/14/2013 - Piecemakers Tapestry Needles Size 28
Small holes are perfect for holding yard in place with a blunt point needle for cross stitch that is sturdy, strong, and easy to thread.