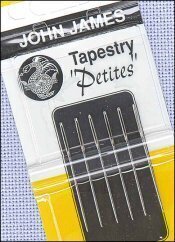 on 11/04/2021 - Needles
A great quality needle to stitch with. This is my favorite needles especially the petite ones.

on 10/07/2021 - not what I wanted
These needles are the correct length, however, the tip is so blunt it catches on my fabric. I have been trying to find a petite 28 with a sharper point to no avail

on 12/22/2020 - Favorite needle
I like that these needles are shorter. I can stitch closer to the end of my threads. They are easy to thread also.

on 12/14/2020 - Disappointed
I've bought these needles for years but these two packs I purchased were terrible. They kept breaking at the eye. I've gone through about 8 of them in three weeks. Disappointed as these are usually great needles that last a long time.

on 12/03/2020
Was disappointed with the needles. Found the eye to be rough which caused the thread to fray and not very strong. I know this as nothing to do with you, but perhaps you can pass this on to John James. Which needles have the best ratings?

on 12/30/2019 - Anchor Floss And John James Petite Neefles 28Loving the
Loving the fact I can purchase Anchor Floss and DMC Floss along with The Gentle Arts at the same time. Great experience loving all with my Long Dog Sampler Game of Swannes. Coming to a close-FFO. Thank-You Sherrie Roberts

on 11/30/2019
Bought hoping to find a good replacement for the discontinued Perfect platinum needle. This works great and Im very pleased to have found it

on 02/26/2019 - Not the Best
These needles were a little disappointing. Although they have a slightly narrower eye than Mary Arden petites, they don't slide through fabric quite as smoothly. If you like JJ needles, it's worth it to spend a little more for Gold or Platinum.

on 02/06/2019 - Fanastic little needles
These are fantastic little needles, but I seem to break them off at the eye quite easily. But that could be me using too much force when trying to anchor my stitches. I will continue to buy them because I do enjoy the smaller size, even if I am a bit rough on them.

on 12/16/2018 - Disappointing
Great size to work with , however they are not well madeThe eye is rough tears thread, and bends easilyThis is not their best product

on 07/13/2018 - John James Needles
Love these needles! They don't 'fray' your threads like other brands. I love how tiny they are too... I haven't tried beading with them yet, but I'm sure they will work. Very happy!

on 02/08/2018 - John James Tapestry Petites
I love these needles. They are the perfect length. I purchased size 28. Despite the small eyes, they are easily threaded.

on 06/23/2017 - Love the Petite needles
Love these needles! Allows you to use more of your thread since you can easily work with shorter strands. Only needles I use now.

on 05/11/2017 - Best I've Used
Love these petite needles. I find them so much easier to use than the typical longer version. Would order from 123Stitch again.

on 02/16/2017 - john james petite needles
I love these needles. Would not use any others. Ruthie rbeickertyahoo.com

on 12/30/2016 - Petite Needles
I have used nothing but these since they first came on market years ago!Give me any others & they feel like a sword they turn bla CV k within a couple days of stitching. TRY THEM!!!!!!

on 06/06/2016 - My 1 choice for cross stitch
These petite needles are AWESOME. I have tendinitis and arthritis in my hands and have no difficulty... in fact these are easier on my hands than a large bulky needle. No thread waste, you can stitch clear to the end of your floss, and, the eye holds your thread so the needle doesn't slip off. It's the only needle I use!

on 02/03/2016 - Petite needles
I really like using them, but find them a bit fragile for what I am working on. It is 25 ct Laguna. Two strands over every thread. This makes for very tight work and when there is a couple of colors in one spot, things get a bit tough. I have bent a number, but will continue to use them because I like the short lenght

on 01/19/2016 - My go to needle
I love these needles. They have a decent size eye to ease threading floss. The shorter length works very well when securing floss tails and when the floss length is shorter.

on 12/21/2015 - terrific little needle
Half way through working a cross stitch pattern and got these in the mail. Tiny compared to what I was using so it took a few stitches for my fingers to adjust to the tiny size of the needle. Wow! Love these needles and the stitches look more neat and when ending a thread you can get under those stitches on the back much more easier.

on 09/19/2015 - Great short needle
I love the size of this needle, and the eye isn't small for two threads. Works much better for cross stitching than the longer needles, you get more use of your threads.

on 07/10/2015 - Best Needles Ever Made
I love these little needles so much. I got to where I couldnt find them in my area and thought they had stopped making them until I found them again here and believe me I am stocking up on them as I never want to run out of these again. They are perfect for stitching even with the nerve damage and numbness in my fingers I still prefer these to any needle I have ever used.

on 04/27/2015 - Cross Stitch Needles
I have used the John James Petite needles before and love them. I find it easier to end a color when using them because you can stitch until you have a shorter piece of floss on the needle. Hope this makes sense.

on 04/14/2015 - Best Needles Ever
I am so in love with these needles, if I didnt have these to stitch with I dont know what I would do. I cannot use the standard needles after using these. I like the 28s and the 26s

on 01/14/2014 - Petite Needles
I love these needles because of the short length and especially because the eye of the needle is small and my thread does not slip out while stitching. I'm very impressed with the service provided by 123stitch.com. I received my order very timely...much faster than any other provider of cross stitch materials, and the shipping and handling was very reasonable. I've ordered from them twice and received the same excellent service both times.

on 12/24/2013 - No more orts!
I love this needle. I've been stitching for many years and nothing is more frustrating than getting down to 2 or 3 stitches and having to re-thread. This needle ends that frustration! They are the only needles left in my sewing kit.